The City of Melbourne has put a lot of effort into getting commuters into Melbourne’s CBD by bike but there is no way to move around once we are there. Cars and vans can use Collins and Flinders but for bikes there is no safe route on the south side of the CBD. People using bicycles to access Melbourne City Library, the CAE, restaurants and office blocks all have to brave Flinders Street or Collins Street to get where they are going. Both these streets see many crashes, and many more Melbournians are discouraged from riding altogether by the danger of these roads.

Metro Tunnel closed Flinders lane to through traffic in February of 2018, only allowing local deliveries and vehicles that need to access car parks. Five Melbourne BUG volunteers counted traffic during this time and we found that very few vehicles need to use Flinders Lane.

*Other is traffic entering the Wilson car park and the Westin Hotel that can exit straight onto Flinders Street and Collins Street without needing to cross Swanston St nor re-enter Flinders Lane.

The route will also act as a ‘connector’ – allowing:

Calming Flinders lane won’t just benefit cyclists. By reducing the number and speed of vehicles these changes will make the street safer and more enjoyable for pedestrians too. As less traffic uses the street there will be further opportunities to remove parking to widen the pedestrian area – desperately needed on Flinders lane’s narrow footpaths.

For pedestrians and bicycle safety and comfort we need to limit the number of vehicles on Flinders Lane. To do this we must block through traffic so that each vehicle can only use Flinders lane for one block before turning back into Flinders Street or Collins Street.

Traffic could be limited with turn bans, raised concrete medians in the middle of streets like Russell or by reversing the direction of travel in some sections.

We’ve presented a few options for how this could happen, but there are many more that would work just as well. Each block needs to be looked at holistically after discussion with all the relevant stakeholders.

Some changes we’ve suggested could even provide the opportunity to increase open space on Elizabeth street by making some traffic lanes redundant. Whichever traffic calming methods are chosen, the goal is to prevent rat runs and return the street to the people.

Why do cyclists need to travel both ways?

Letting bikes go both ways would provide crucial local access for CBD residents and well as the many students and City of Melbourne library users who need to access Flinders Lane.

Many cyclists are already going up Flinders lane to Swanston Street because it is the only option. Our plan would formalise what already exists.

Does this have to be expensive?

Melbourne BUG does not recommend any expensive civil works. Letting bikes travel both ways could be as easy as installing traffic lights for cyclists going in the other direction, coupled with lane markings.

There are ways our treatment could be improved with some civil works. These would be at some cost though – and we think that the first priority should be to get the changes in.

No. Bikes travel both ways commonly on narrow streets in the UK, France, Germany and Belgium. Belgium’s guidelines require a road width of 3m – much narrower than Flinders Lane. Even the most conservative cycling countries accept contra-flow lanes on roads Flinders’ lane width.

All vehicles are going slow and are able to make good eye contact so they can pass each other safely. When the occasional large vehicles approaches cyclists usually get off their bike to allow the truck to pass. This would not be necessary though for the large number of delivery vans who could safely pass bicycles on Flinders Lane.

Will this be dangerous for pedestrians?

This route will work for cyclists as a local route. Most cyclists will only use it for a block or two to get onto a bigger road. Importantly, cyclists travelling the ‘wrong way’ will be going uphill and therefore will be travelling slower.

Has this been done before in Australia?

Contra-flow Lanes have already been implemented in South Australia on very narrow roads. Adelaide Council has been letting bikes travel both ways on streets Flinders Lane’s width for years. A terrific paper by an Adelaide researcher on this topic is attached.

There are local examples of narrow contra-flow lanes all throughout Melbourne with Yarra and Moreland leading the way. One great example being Truscott Street in Brunswick. These lanes have worked for years without any community backlash or safety problems.

Parking on one side of Flinders Lane could be retained under our plan. Removing some 1-hour parking and converting it to loading zones or 5 minute parking would help to give more space to pedestrians and reduce traffic particularly in the evenings, but it’s not absolutely necessary.

The area between Spring and Exhibition has 6 parks on the north side of the street. These would need to be removed.

Isn’t there too much traffic on Flinders Lane to make this work?

Yes.
City of Melbourne’s transport and Cycling plans both recommend that Flinders Lane between Elizabeth and Swanston should be a place for people, not cars. And yet far too many cars use it everyday. 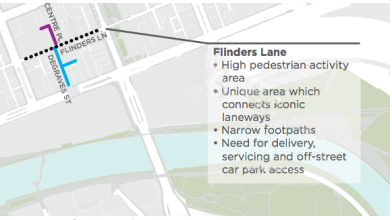 South Australian experience and international guidelines state that there must be less than 1,000 vehicles per day on a narrow road with a contra-flow bicycle lane. To achieve that number you can only allow local access for motor vehicles accessing car parks or deliveries.

Flinders lane is currently flooded with through traffic trying to use this street as a rat run. Google Maps will often suggest drivers take Flinders Lane to get from Albert Street to Spencer Street. If traffic calming is used to stop rat running very few cars need to use each block.

How many vehicles need to use Flinders Lane?

In February of 2018 Melbourne Metro closed Flinders lane to through traffic, allowing only pick ups, deliveries and people who needed to use local car parks. We did a traffic survey during the closure. Only cars accessing car parking on or off the street could enter. Loading and resident parking were allowed but not rat running.

We found that only 244 cars drove on the Degraves block of Flinders Lane over a 9 hour period on a weekday. That’s one car every 2 minutes. The “Hosier” block had one car every minute using the road, but half of this traffic was accessing the Wilson car park near Swanston Street or the Windsor hotel. All of this traffic
can exit via Flinders or Collins Streets. To reduce traffic sufficiently, the current exit from the Wilson car park onto Flinders Lane must be closed, so that cars exit via the exit ramp this car park has on Flinders Street.

As a comparison, Truscott Street in Brunswick has a similar width to Flinders Lane and allows bikes to go both ways with an average of 1 vehicle every minute.

If contraflow works on busier streets in Melbourne it can work on Flinders Lane. 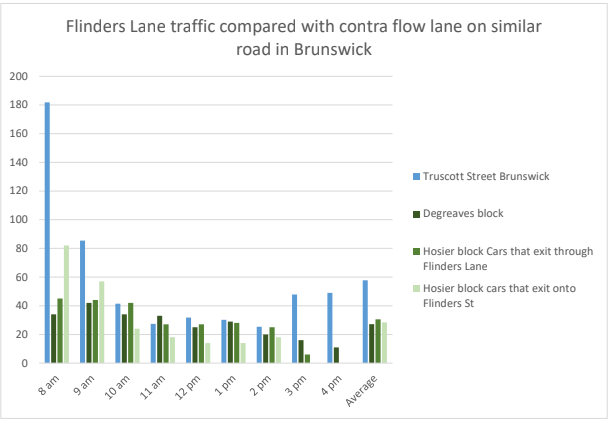 If cars have to turn into Swanston Street won’t that slow bike traffic on Swanston?

One disadvantage of option A is that all traffic from the Hosier and Degraves blocks of Flinders Lane will exit onto Swanston Street. If this is a big concern to council or Yarra Trams then Option B could be chosen. But there are two things to note:

The footpath outside Young & Jacksons is very crowded. We propose widening the footpath by eliminating parking (mainly used by police), leaving space for a bike lane and no motor traffic. As well as easing pedestrian congestion, this will be a vast improvement for bikes compared to the current squeeze between trams and parked vehicles.

Going in the other direction, loading zones could be provided with a peak hour clearway, an improvement on the current 24 hour police parking there.

What about local traffic?

There are some cars that need to use each block of Flinders Lane – but not many. Our plan maintains full access for deliveries, with no reduction in car parking necessary on most blocks.

Could we have a trial first?

There’s no reason that the traffic calming measures could not be trialled first. Temporary barriers could be inserted where we recommend road blockages coupled with new signs.

After a few months, if traffic has reduced as we predict then bicycles lights can be installed to let bicycles go both ways. 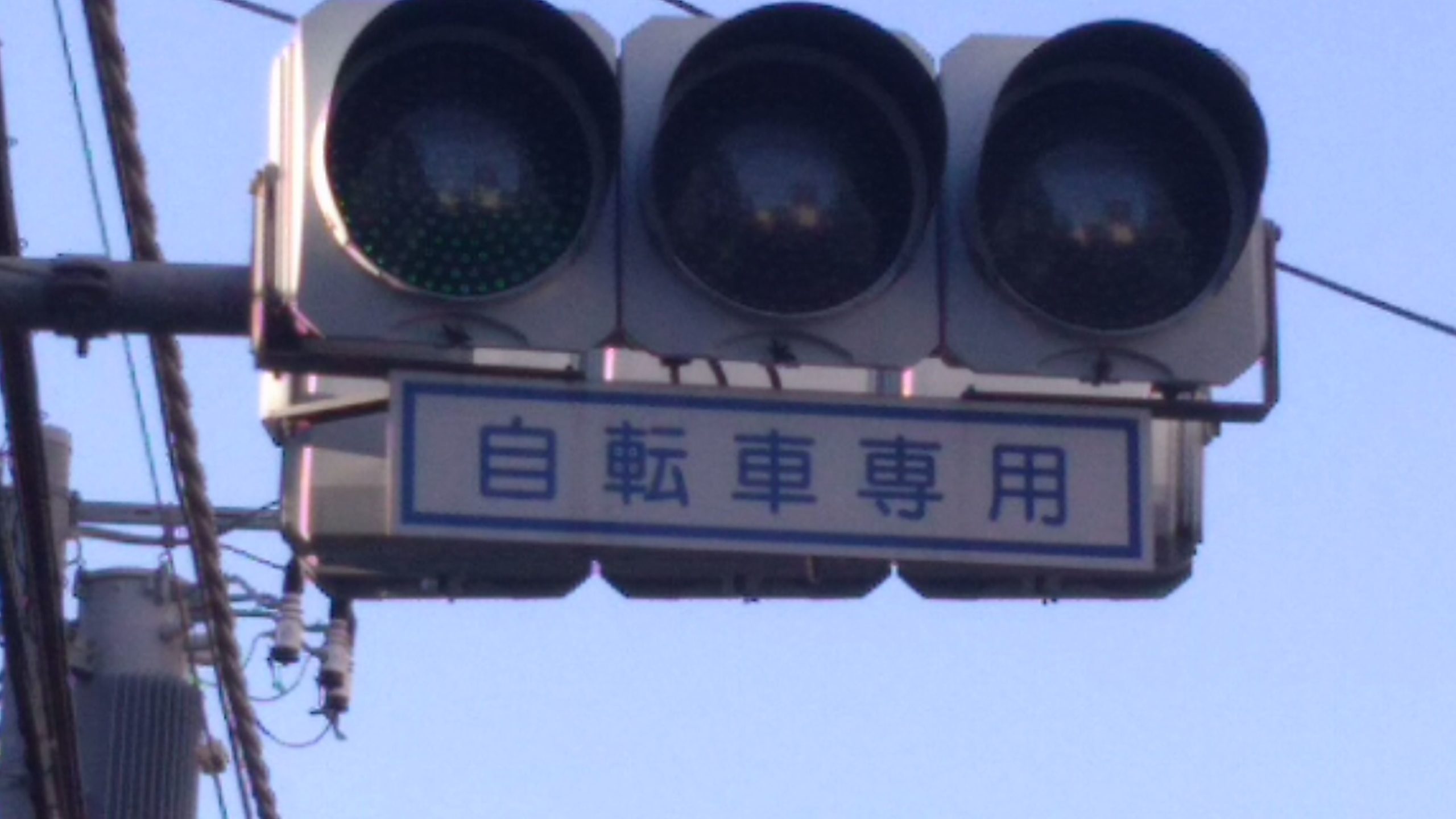 Above: counter-flow traffic lights for bicycles in Tokyo (translation: bicycle specific use)

Why not Little Collins?

We think this could work on all the little streets. International experience suggests that the more streets bikes can go one way on, the less confusion there is for motorists and pedestrians upon seeing a bike going the other way.

Flinders Lane should be first because it is closer to the south side of the CBD, and it is already more popular with cyclists – particularly in the Degraves block. Our research has found more on street bikes parked on Flinders Lane than Little Collins.

Riderlog data is not scientific but the most recently data publicly released as part of City of Melbourne’s transport plan shows that Flinders Lane is more popular than Little Collins for bikes.

Importantly, Flinders Lane provides a ‘last chance’ for Elizabeth Street cyclists to get onto Swanston Street and Princes bridge to exit the city. 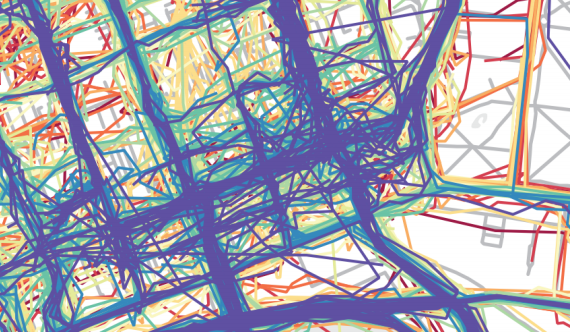 Is there an opportunity for more open space on Elizabeth Street?

Yes. Depending on where you send traffic there are lots of different options that could free up open space on Elizabeth Street. We’ve presented three ideas below, but the options are endless. 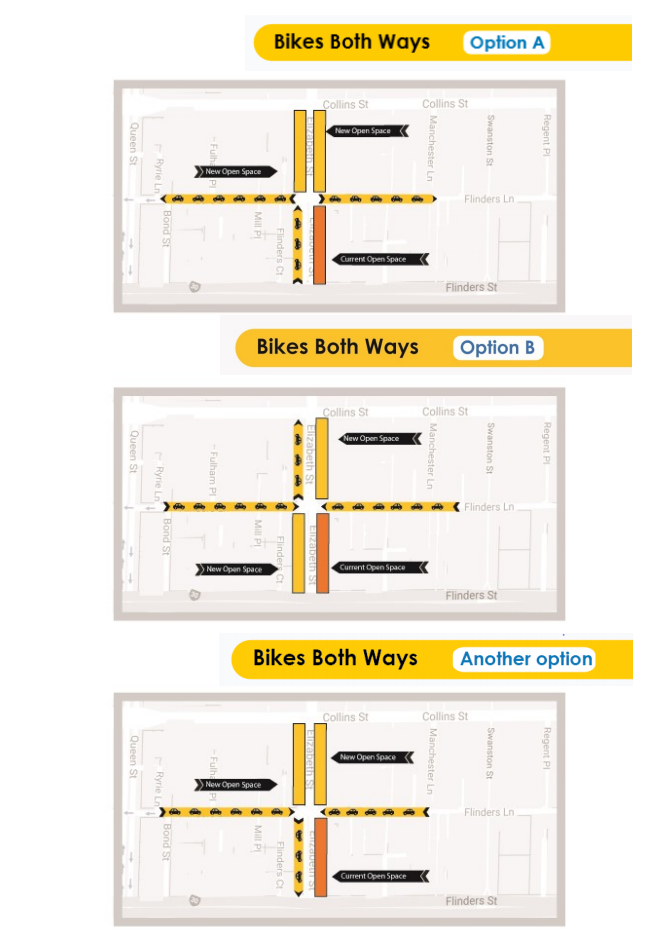